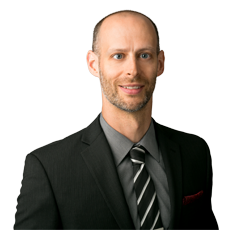 David practices general insurance defence litigation with an emphasis on the defence of dentists, hospitals and school boards in negligence and human rights claims. David also regularly defends businesses and municipalities in property damage and personal injury claims. He has experience appearing as counsel at all levels of court in British Columbia, and the Supreme Court of Canada.  In his administrative practice, David has defended matters before the Human Rights Tribunal, the Health Professions Review Board, the College of Dental Surgeons, the Hospital Appeal Board, the Workers Compensation Appeal Tribunal, and the Emergency Medical Assistants Licensing Board.

David articled at Guild Yule in 2000 and became an associate with the firm in 2001. He was admitted to the partnership on January 1, 2008.

David has been recognized by Benchmark Canada as a Future Star in 2015 and a Litigation Star in the Insurance practice area since 2016. He is also rated by Lexpert in the Medical Negligence (Defendant) practice area and by Best Lawyers in the Personal Injury Litigation category.