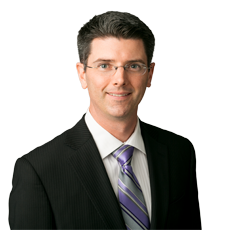 Mark has a general insurance litigation practice with particular interests in property loss subrogation, defence and coverage claims and Maritime matters. He also has considerable experience defending product liability, personal injury, and municipal claims and has appeared before all levels of the BC Courts and the Federal Court of Canada.

Mark has been at Guild Yule from the commencement of his articling year apart from a recent year abroad with his young family where he practiced at an international insurance law firm in Bristol, England. Mark is an avid sailor and in his life before the practice of law, he competed and coached throughout North America and Australia.

Mark joined the partnership in January 2016.

Mark has been recognized by Benchmark Canada as a Future Star in 2020.

Appearances in the Provincial and Supreme Courts of British Columbia, the Federal Court of Canada and before the BC Human Rights Tribunal as lead and junior counsel and in Chambers of the BC Court of Appeal (references to specific parties have been removed to protect client confidentiality).

• Dismissal of construction holdback claim against Defendant College for want of prosecution.

• Counsel for fuel supplier in obtaining a Federal Court judgment against the owners of a commercial vessel, and the vessel in Rem, relating to unpaid accounts for fuel and other necessaries provided to the vessel.

• Counsel for Health Authority in obtaining a Preliminary Decision dismissing a BC Human Rights Tribunal Complaint.

Prosecution and mediation of subrogated claims arising from damage to property caused by fire and flood, including:

• Counsel for insurer prosecuting subrogated claim for damages arising from a flood at a residential apartment building caused by a burst sprinkler head.

• Counsel for insurer prosecuting a subrogated claim for damages arising from a fire at a residential apartment building caused by a boiler malfunction.

Counsel for Plaintiffs and Defendants in maritime actions in the BC Supreme Court and Federal Court of Canada including:

• Co-Counsel for a large diesel engine supplier and maintenance provider following a fire aboard a yacht resulting in a claim against client in excess of 2 million CAD by vessel underwriters.

Defence Counsel for BC Municipalities in resolution of personal injury and property damages claims by way of mediation or informal settlement, including:

• Defence of Municipality in litigation following large scale seawater flood within Municipality. Central issues in the case were the reasonableness and adequacy of the Municipality’s emergency response and infrastructure (seawall and pump stations) systems.

• Defence of Municipality in personal injury action arising from near drowning of a toddler in a residential pool. Central issues in the case were the Municipality’s pool inspection program and the severity of the Plaintiff’s hypoxic brain injury.

Defence of institutional, corporate and individual clients in dozens of personal injury actions such as trip and slip and fall claims raising issues such as occupiers and commercial host liability, standard maintenance practices, prior safe use, Building Code and Bylaw compliance as well as motor vehicle accident claims.