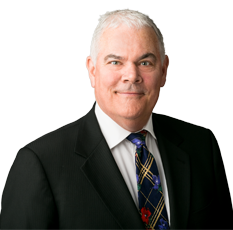 Mark is Vancouver-born and raised and a graduate of the University of British Columbia Law School. As part of his articling, he completed a clerkship in both the Supreme Court of British Columbia and with the Honourable Mr. Justice Seaton in the Court of Appeal in 1975-6. His practice has always been restricted to litigation with a focus on professional malpractice defence, insurance and appellate counsel work. During his almost 40 years as a lawyer, he has done numerous trials and appeals at every level of court including the Supreme Court of Canada.  He is frequently retained to assist other counsel with their litigation. He also has extensive experience in mediation and alternative dispute resolution both as counsel and as a mediator. He joined Guild Yule LLP in the autumn of 2006 after 11 years with Skorah Doyle.

He works in a great variety of litigation areas including product liability claims, medical malpractice defence, Errors and Omissions claims, directors and officers liability claims, administrative law and appellate work. For over 20 years he has represented insurance brokers in British Columbia in their errors and omissions claims.  In addition to litigation Mark also provides insurance coverage advice.

Inclusion in the Best Lawyers® guides is based on an exhaustive and rigorous peer-review methodology that has been developed and refined over more than 25 years, and the current edition of The Best Lawyers in Canada is based on more than 275,000 confidential evaluations.

Mark was inducted into the Litigation Counsel of America in 2011.

He is recognized in Benchmark Canada as a “Local and Litigation Star” in Insurance Law, Product Liability, Dispute Resolution and Personal Injury.

Outside law, Mark enjoys golf, gardening and his dogs.