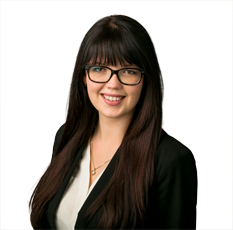 Natasha is an associate lawyer at Guild Yule LLP. She practices general insurance defence litigation including the defence of municipalities, professionals, educational institutions, health authorities, and businesses. Her practice includes personal injury, professional liability, class actions, product liability, and medical malpractice matters. She has experience at the BC Human Rights Tribunal, the Provincial Court of British Columbia, and the British Columbia Supreme Court.

While attending law school at the University of British Columbia, Natasha worked as a research assistant in the areas of access to justice and technology. She also received an award from the Law Foundation of British Columbia for her academic achievement and competed in the BC Law Schools Moot where her team won first place and she was awarded the J.S.D. Tory Prize for Advocacy.

Natasha also holds a Master of Arts degree from the University of Victoria where she received the Joseph-Armand Bombardier Canada Graduate Scholarship for her thesis on the use of empathy as an educational tool for middle school students. Natasha brings the creativity, resilience, and compassion she developed during her graduate studies to her daily practice as a lawyer.