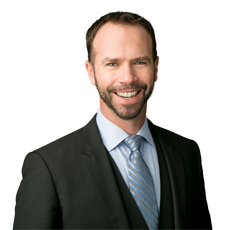 Russell practices commercial, municipal and insurance litigation, with an emphasis on insurance defence coverage.  He has acted as counsel in claims for personal injury, defence of hospitals and schools, limitation issues, wrongful dismissal, fire-loss, product liability, commercial disputes, environmental liability, construction defect, as well as subrogation counsel in multi-party fire loss claims.  He has appeared at all levels of court in British Columbia, and multiple administrative hearings.  Russell has been a regular volunteer with Access Justice Pro Bono for many years.

After three years of teaching English in Japan on the JET Programme, Russell completed his LLB at the University of British Columbia in 2004.  Russell completed his articles with Mair Jensen Blair in Kamloops in 2005, moved to Guild Yule & Company in 2007, and has practiced with the firm since.    He joined the partnership in January, 2014.