Shauna Gersbach is a civil litigator who practices primarily in insurance defense.

She regularly provides advice to schools, municipalities, religious institutions, and other organizations on a variety of matters, including employment, human rights and claims arising from personal injury, product liability and property damage.

Shauna has represented clients at all levels of court in British Columbia and before several administrative tribunals, including the Employment Standards Branch, the BC Human Rights Tribunal and the Workers Compensation Board.

She was recently a member of a working group for the BC Human Rights Tribunal whose task was to provide recommendations to the Tribunal for representative complaints on behalf of children, youth and vulnerable adults.

Shauna completed her law degree at the University of Victoria, and was called to the bar after clerking for six judges of the Supreme Court of British Columbia. Prior to attending law school, she obtained a Bachelor of Science (with Honours) in Statistics.

Shauna has been recognized by Benchmark Canada as a Future Star in 2020 for dispute resolution in insurance.

Mother obo others v. School (No. 2), 2015 BCHRT 92 – successfully defended a human rights complaint against a school, in which the Complainants alleged racial discrimination. The Complaint was dismissed following a 5 day hearing, with the Tribunal concluding that the Complaint was not justified.

Ouimet v. Kwok, 2014 BCSC 1178 – successfully defended a petition for judicial review by the Claimant of a decision by the BC Provincial Court striking the Claimant’s action arising from dental malpractice.

Ouimet v. Kwok, CA042021, 2014 oral reasons for judgment – successfully defended an application by the Claimant seeking indigent status for the purposes of the appeal proceeding and obtained an order requiring the Claimant post security for costs on the basis that the appeal lacked merit.

Stroszyn v. Mitsui Sumitomo Insurance Company Limited, 2014 BCCA 431 – co-counsel on an appeal of a petition arising from the scope of coverage under an excess policy of insurance, as well as the scope of a leasing company’s liability under the Insurance (Vehicle) Act.

Thomas v. The Roman Catholic Archbishop of Vancouver, 2016 BCSC 1466 – successful defence of the occupier in a trip and fall claim, following a summary trial application.

Jensen v. Ross, 2015 BCSC 2065 and 2016 BCCA 278 – obtained dismissal of an action based on the expiry of the limitation period, and security for costs at the Court of Appeal.

While attending law school at the University of Victoria, Shauna was awarded the Davis LLP Prize in Administrative Law, the Harper Grey LLP prize in Insurance Law, and the Lars Alfred Lindholm Memorial Scholarship for highest standing in Labour law. She was also awarded the BC Supreme Court Judge’s Scholarship as well as the President’s Scholarship for overall academic performance.

Shauna completed French immersion and received a bilingual certificate. She has also studied Spanish and Italian.

Shauna is an avid runner. She has competed at the national level in cross-country and road running.  Shauna also enjoys playing the piano, and singing jazz, opera or musical theatre. 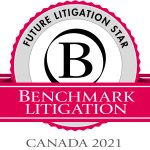